Behavioral studies in humans and rats demonstrate that visual detection of a target stimulus is sensitive to surrounding spatial patterns. In both species, the detection of an oriented visual target is affected when the surrounding region contains flanking stimuli that are collinear to the target. In many studies, collinear flankers have been shown to improve performance in humans, both absolutely (compared to performance with no flankers) and relative to non-collinear flankers. More recently, collinear flankers have been shown to impair performance in rats both absolutely and relative to non-collinear flankers. However, these observations spanned different experimental paradigms. Past studies in humans have shown that the magnitude and even sign of flanker effects can depend critically on the details of stimulus and task design. Therefore either task differences or species could explain the opposite findings. Here we provide a direct comparison of behavioral data between species and show that these differences persist  collinear flankers improve performance in humans, and impair performance in rats  in spite of controls that match stimuli, experimental paradigm, and learning procedure. There is evidence that the contrasts of the target and the flankers could affect whether surround processing is suppressive or facilitatory. In a second experiment, we explored a range of contrast conditions in the rat, to determine if contrast could explain the lack of collinear facilitation. Using different pairs of target and flanker contrast, the rats collinear impairment was confirmed to be robust across a range of contrast conditions. We conclude that processing of collinear features is indeed different between rats and humans. We speculate that the observed difference between rat and human is caused by the combined impact of differences in the statistics in natural retinal images, the representational capacity of neurons in visual cortex, and attention. 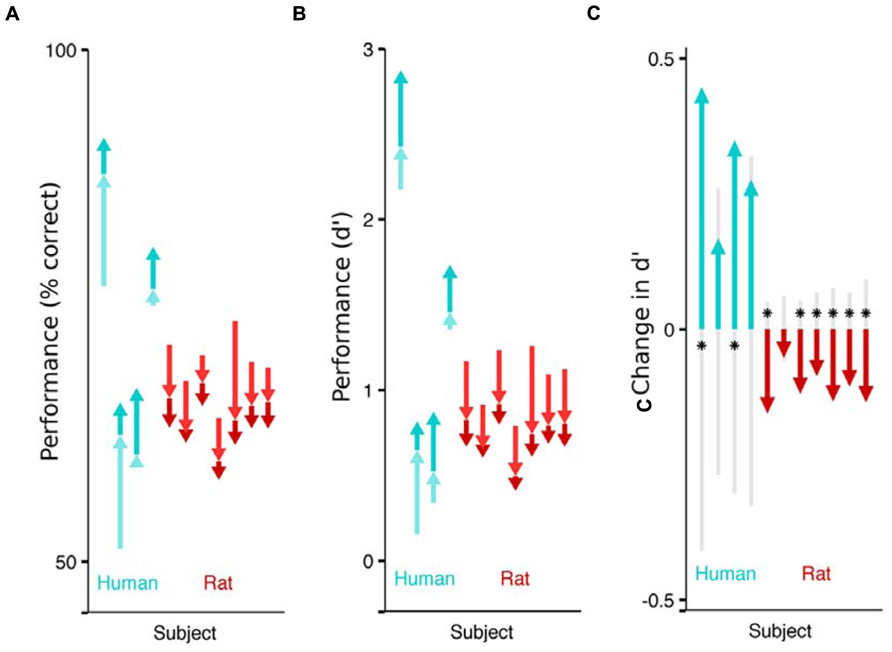 Impact of flanking stimuli on the performance of humans and rats detecting a faint visual target. Each arrow indicates the difference in fraction of correct trails across stimulus categories, for a single subject (cyan for humans, red for rats). The pale arrow denotes the impact of non-collinear flankers with respect to no flankers. The darker arrow indicates the additional impact of collinear flankers, above and beyond the effect of non-collinear flankers. The sum of the two arrows captures the difference in performance between detecting targets without any flankers, and detecting targets in the presence of collinear flankers. The absolute performance on each of the three stimulus conditions (collinear, non-collinear, no flank) is captured by the tip and the base of the arrows. (A) Effect of flankers on performance (% correct). Humans performed better on trials with collinear flanking stimuli (upwards arrows) and rats performed worse on the trials with collinear flanking stimuli (downwards arrows). (B) Effect of flankers on sensitivity (d). (C) Each subjects sensitivity on the collinear trials minus their sensitivity on the non-collinear trials. The gray shaded region indicates chance differences within the range spanned by 95% of 10,000 random permutations of the subjects response with respect to the stimulus. If performance for a given subject is significant beyond this chance range, it is marked with an asterisk.