Visual response properties of neurons in the dorsolateral geniculate nucleus (dLGN) have been well described in several species, but not in rats. Analysis of responses from the unanesthetized rat dLGN will be needed to develop quantitative models that account for visual behavior of rats. We recorded visual responses from N=130 single units in the dLGN of N=7 unanesthetized rats. We report the response amplitudes, temporal frequency and spatial frequency sensitivities in this population of cells. In response to 2Hz visual stimulation, dLGN cells fired 15.9+/-11.4 spikes/sec (mean+/-SD) modulated by 10.7+/18.4 spikes/sec about the mean. The optimal temporal frequency for full-field stimulation ranged from 5.8 to 19.6 Hz across cells. The temporal high-frequency cutoff ranged from 11.7 to 33.6 Hz. Some cells responded best to low temporal frequency stimulation (low-pass), others were strictly band-pass; most cells fell between these extremes. At 2 - 4 Hz temporal modulation, the spatial frequency of drifting grating that drove cells best ranged from 0.008 to 0.18 cycles per degree (cpd) across cells. The high-frequency cutoff ranged from 0.01 to 1.07 cpd across cells. The majority of cells were driven best by the lowest spatial frequency tested, but many were partially or strictly band-pass. We conclude that single units in the rat dLGN can respond vigorously to temporal modulation up to at least 30 Hz and spatial detail up to 1 cycle per degree. Tuning properties were heterogeneous but each fell along a continuum; we found no obvious clustering into discrete cell types along these dimensions. 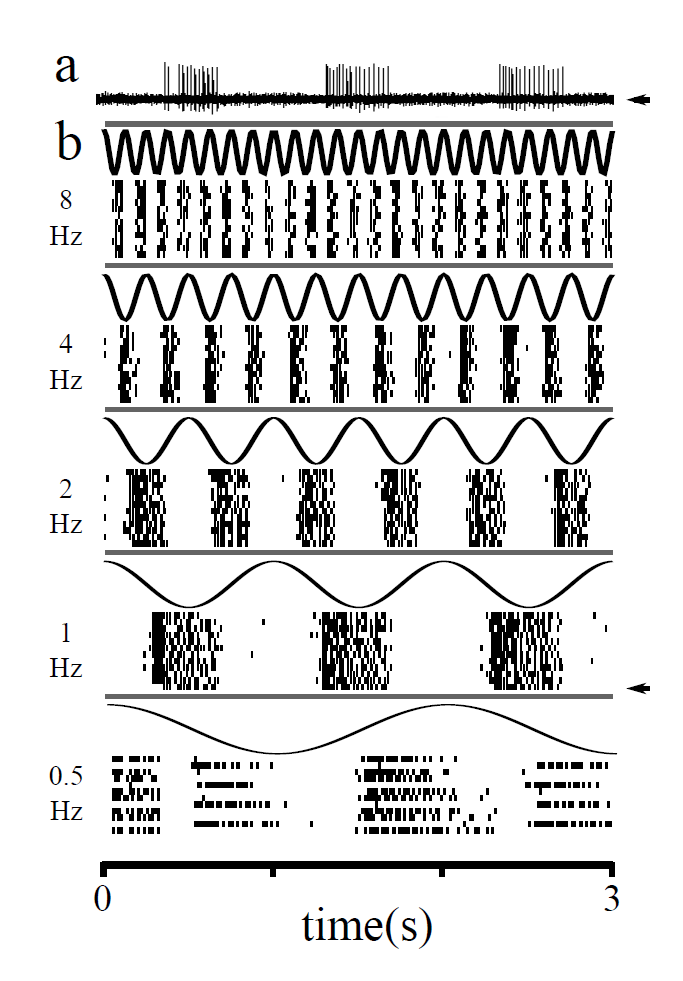 At left: example responses of a single unit to full field modulation at different temporal frequencies. (a) Voltage trace from a single unit recorded from the dLGN of an awake rat. The raster corresponding to this trial is marked with an arrow in b. (b) Black curves show the luminance time courses sampled at the frame rate (integrated within frame). Each row of a raster indicates responses for a single trial and each tic mark indicates the time of a single action potential.