Visual response properties of neurons in the rat LGN 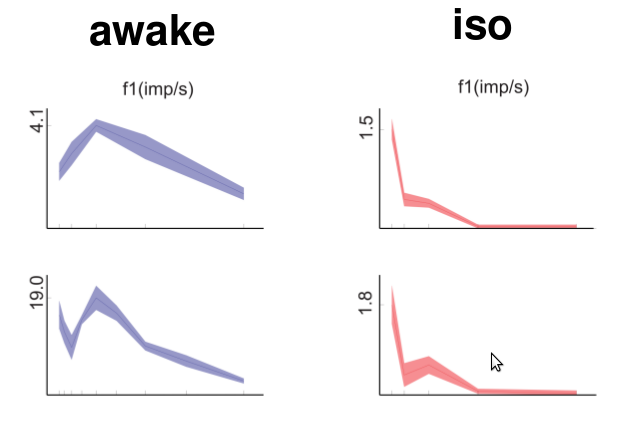 We characterize the response properties of visual neurons in the lateral geniculate nucleus (LGN) of adult Long-Evans rats. Most cells were recorded under isoflurane anesthesia; some cells were recorded in awake, eye-tracked, passively viewing conditions. We characterize the spatial frequency tuning, direction selectivity, and contrast sensitivity of neurons in the rat LGN.

We recorded extracellular spikes in response to drifting sinusoidal gratings with varying direction of motion and spatial frequency. In the anesthetized state, some cells were band pass with a peak response around 36° to 72° per cycle. However, more than half the cells responded strongest to the lowest spatial frequency that was reasonable to display on the monitor (144°/cyc), suggesting that they were low pass. Preliminary data indicate that most cells are band pass in the awake state, with a peak response about 18° to 36° per cycle. Some LGN cells show significant direction selectivity in the anesthetized state. This remains untested in the awake state.

For other cells, we presented a static square- wave grating for 200 msec per trial, varying the grating contrast from trial to trial. This stimulus was designed to match stimuli viewed by other rats in an awake behaving paradigm. Most LGN neurons reduced firing as contrast decreased, and some completely ceased to fire at low contrast suggesting that behavioral performance at these contrasts was probably limited by sensory encoding rather than cognitive confusion.

To fit the stimulus-response relationships in these data, we used a generalized linear model (GLM) that separately accounts for the effects of the stimulus parameter of interest, refractoriness (spiking neural history), and the state of the network (LFP).