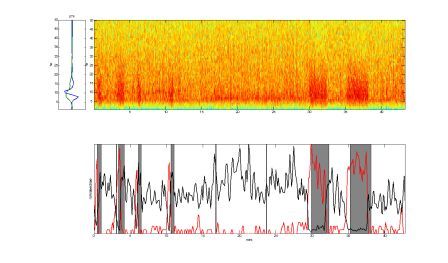 We implanted chronic wells in adult Long-Evans rats over the stereotaxic coordinates of LGN. In multi-hour sessions over subsequent weeks, we recorded well-isolated extracellular spiking activity and LFP while the rats were headfixed but unanesthetized. Once a visually responsive unit ventral to hippocampus was isolated, a CRT or LED array presented spatially uniform flickering visual stimuli. We held cells as long as possible (average 1 hour) while displaying two 30 sec repeated flicker patterns. In the first pattern, frame luminances were drawn independently at 100Hz from a gaussian distribution with contrast chosen such that the central 99%of the values fell in the luminance range of the display; the 0.5%tails were clipped to the extrema. In the second pattern, the flicker reprised a 30 sec contiguous segment from a photodetector recording taken by a person walking through a forest in daylight [1]. The recording was resampled from 1200 to 100 Hz. In the case of the CRT, the values were scaled so that the brightest 1%were clipped, so that periods of dim flicker still resolved in the CRTs reduced dynamic range (8 bits) relative to the recording (15 bits). Units were well isolated, as verified by spike shape and refractory analysis. Single unit responses were not sparse, but showed strong spike triggered average stimuli.

We identified putative low threshold calcium bursts by the criterion of 100 ms quiescence followed by interspike intervals of < 4 ms [2]. Most cells fired a mixture of both burst and tonic (non-burst) spikes. In many cases, bursts also showed a strong average triggered stimulus, corroborating earlier reports of visually driven LGN bursts in anesthetized cats [3] and demonstrating that these results were not merely an artifact of anesthesia. These data support the claim that visual stimuli sometimes hyperpolarize LGN neurons enough to deinactivate T-channels, priming a calcium burst to be triggered upon subsequent superthreshold stimuli, even in natural physiological states.

Because the rats were unanesthetized, both LFPs and firing characteristics were highly nonstationary, varying along a continuum of states that likely correspond to alertness levels. Many recordings contained brief epochs (< 10 min) of enhanced LFP power at < 20 Hz, coinciding with a high burst rate and low tonic firing rate. During other epochs, the same cell responded with a higher tonic firing rate, lower burst rate, and reduced rhythmicity. Here, we characterize these states in terms of their LFP spectral power, spike-field coherence, firing rate, burstiness, reliability, precision, sparseness, and stimulus encoding using reverse correlation and information measures.


We acknowledge support from the JSMcDonnel Foundation.